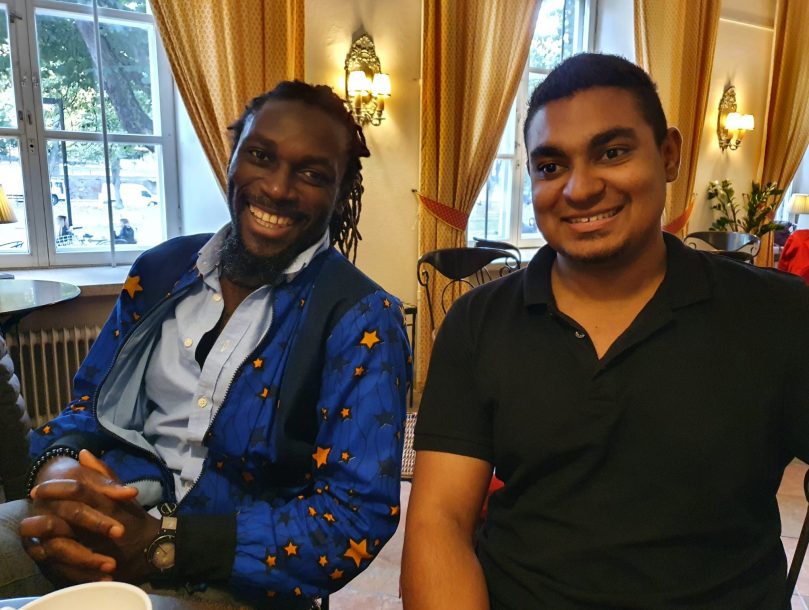 Tempo-project aims to boost immigrants’ employment, entrepreneurship and integration in Southwest Finland. In the long run, we hope to see an increasing number of international work communities where cultural diversity is seen as an asset.

We met with Aminkeng A Alemanji who works as a Lecturer at Åbo Akademi and heads the Masters Degree Programme in Social Exclusion and Khushal Naik, previous student in the programme and nowadays Project Assistant at Åbo Akademi, to talk with them about social exclusion, racism and the benefits of diversity.

Alemanji studied in his PhD thesis (2016) antiracism education in Finland. According to his research, approximately 80 percent of the Finnish teachers have not received any training in antiracism even if Finland is becoming more diverse. In his study, Alemanji defines ’racism’ as discrimination based on skin colour. However, he points out that no definition of a concept like racism is holistic or without limitations. Racism exists in legislation, policies, beliefs, structures and actions.

Black Lives Matter -movement has increased discussion on racism in the media including the social media where, according to Alemanji ”people mainly want to look good and look for likes”. Yet, deeper conversations and concrete actions against discrimination are still missing even if Finland ratified the UN International Convention on the Elimination of All Forms of Racial Discrimination already in 1970.

In Alemanji’s opinion, Finnish teachers should receive antiracism education because of the increased diversity in society but it seems that racism is not considered as a problem in Finland – even if many research works have brought out that racism is common. For example, according to the survey conducted by the European Union Agency for Fundamental Rights (2018), up to 63 % of respondents of African descent had experienced racist harassment in Finland.

It is also worrying that 29 % of the 1009 recruiters interviewed by Taloustutkimus in early 2020 mentioned countries or regions, mostly Middle East and Africa, from where they would not want to hire employees. Hence, discrimination is real: not all the available jobs are truly open for all the job seekers.

However, with experience attitudes become more open. The recruiters who have previous experience in hiring international employees are willing to hire international staff members also in the future. (Korhonen 2020.)

Sadly, racism and anti-foreigner violence exist everywhere and Covid-19 has increased them in many parts of the world. Naik (2020) points out in his Master’s thesis that the inclusive dream of the ‘Rainbow Nation’ seems a distant memory as practices of exclusion are frequent in the post-Apartheid South Africa that witnessed three waves of anti-foreigner violence in 2008, 2015 and 2019. Migrants are often seen as scapegoats for all the problems in society. Therefore, the social, economical and political decisions taken by the governments matter more than ever.

Alemanji emphasizes that ’social exclusion’ is a complex concept that extends beyond economic disadvantage and poverty. Social exclusion is a multidimensional process through which a person loses political, legal, and social agency, leading to stigmatisation or discrimination. Hence, in addition to government policies, the private sector strategies have an important role to play in preventing social exclusion in our era of increasing inequalities.

The private sector not only has a responsibility of preventing exclusion but it can benefit from diversity and inclusiveness. According to international research, diversity increases creativity, innovations, language skills, customer satisfaction and financial success of companies (Boston Consulting Group 2018). Nearly 60 % of the European companies who have developed a strategy for diversity report that it has increased innovation and creativity as well as boosted their business activity (European Business Test Panel 2005).

As Finland is already now competing with other countries over international talents, Alemanji gives the following tips for companies who want to become more diverse and inclusive:

Both Alemanji and Naik have seen some positive developments vis-à-vis diversity in working life during their stay in Finland. At Åbo Akademi, Alemanji was glad to realize that he ”was not the only foreign-born researcher anymore”. Naik points out that Café Art, where the interview took place, has recruited international employees who were not fluent in Finnish or Swedish but have learned the languages while working.

In the beginning of his PhD thesis (2016), Alemanji writes: ”One of my ultimate objective in life, which this study helps me accomplish, is to teach my children who they are (beautiful Finnish children with a Cameroonian heritage), what they are (what they wish and aspire to become) irrespective of what the world around them may tell them they are or try to make of them.”

Photo by Laura Keihäs: Aminkeng A Alemanji (left) and Khushal Naik at Café Art in Turku

Naik, Khushal 2020. Inclusive Dreams and Excluded Realities : An Analysis and Critique of ‘Xenophobic’ Rhetoric, and Practices of Exclusion in the South African ‘Rainbow Nation’
http://urn.fi/URN:NBN:fi-fe2020050525134